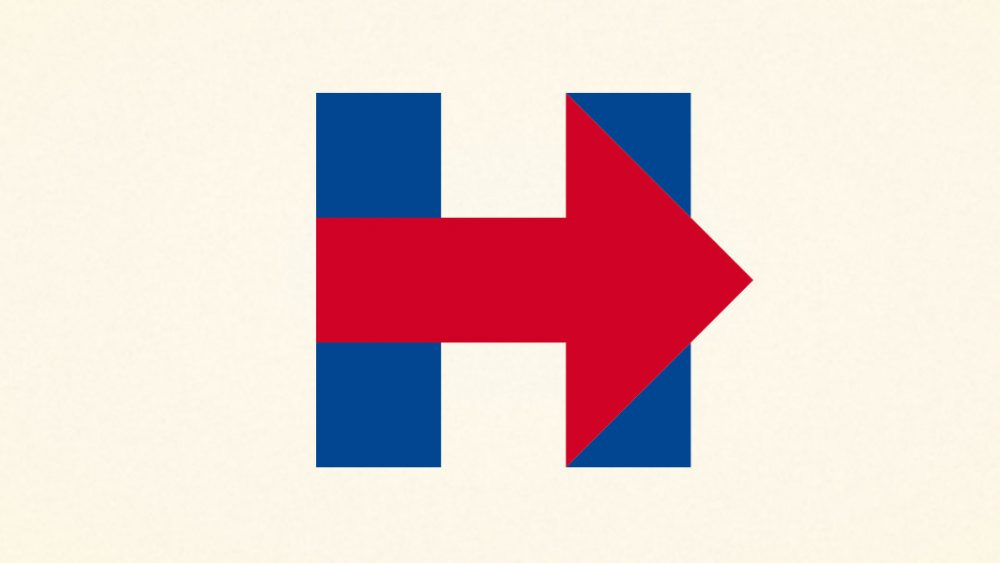 There seems to be a heated debate over the new Hillary Clinton logo for her campaign. I decided to take a look at it myself and really analyze its simple form.

Essentially, it’s the letter “H” with an arrow as its crossbar. There’s not much more to it visually. Critics are calling it “clunky, too simple, and boring.” As a political leader, it is unlike many of the other logos you might see. It’s not very inviting and rather impersonal. Also, there isn’t anything else to reference America other than the expected color scheme of red and blue.

How Effective Is It?

Logos should at least be versatile and memorable; this one is. Though many people don’t really care about the psychology behind a logo—other than designers. It can easily be taken at face value and “crowdsmashed.” But let’s look at the good aspects of Hillary Clinton’s 2016 campaign logo.

Though it may be simple in form, it’s extremely versatile and can be used in many different ways. As an icon, watermark, or a simple standalone graphic at any size.

There’s not much to this logo visually, so there’s nothing to overanalyze or discover. And while that can make it seem uninteresting, it also makes it easy to remember. It’s bold and the vibrancy of the color scheme is impactful.

Okay, so it’s an arrow. Big deal, right? Well, yes, arrows are commonly used symbols, but that’s because they’re easy to interpret. An arrow pointing to the right symbolizes “moving forward,” which has a positive connotation. As a country that’s slowly been recovering from a recession for quite some time, moving forward is clearly the direction to go.

Also, as mentioned earlier, it is bold—or rather, it’s strong. I dissected the logo using a grid layout, which shows a balanced infrastructure that helps emphasize stability.

You can see how the logo is composed of squares and triangles that are evenly spaced into columns and 45/90 degree angles. Also, the crossbar that connects the “H” is the same size as its vertical counterparts. The prominence of geometry in this logo help make it very iconic.

What do you think?

When you get right down to it, it’s a simple logo that doesn’t appear very interesting. The debate about whether or not it’s a “good” logo doesn’t really matter, because it’s effective and that’s the point.

Receive my standard logo package at a discount rate!

The web packages provided offer standard web development including the foundation of the site and all it’s standard webpages.

Examples of Features NOT Included

These types of feature requests will be considered standalone projects after the site is complete. These additional projects may also require third-party tools that have outside costs beyond my own. A quote will be provided based on your individual needs.

Standard web pages are considered informational. They provide content and information about your business or organization. They do not include other functionality such as user account logins, payment forms, shopping carts, etc. Those types of items can be created as separate standalone projects as needed.

To make things easier for my clients, I’ve provided a Pay-As-You-Go web package option. This option allows for a much lower deposit and also includes ongoing services. The monthly fee continues for as long as your site is active.

General web maintenance includes regular 6-month updates to your site. Web standards, browsers, and coding languages are constantly evolving which means your site will need updated to stay current with these changes.